You were right about the end, my love. You called it. I should never have doubted that
our neighbour’s worst impulses would finally impale reason and compassion with pitchforks.
Uncle Sam was always a bit of a bully, and never my favourite, but he was still sort of family.
For years he was a roadside attractcident drawing us in despite ourselves. He was Vegas, neon
unreality, a guy with too many guns talking a big game & dropping by with deplorable friends, a
crazy, small town, big city patriot, with some beautiful dreams and a fatal attraction to nut jobs.
Knowing where it ends changes the past like learning your teacher was a child molester.
If I could do it again, I wouldn’t laugh. I wouldn’t blithely toss off the ugly as a foil for my superiority.
Now, I regret my irony, my naïve belief that progress is permanent. I regret my complacency as truth
gave way to truthiness, then accelerated into post-truth until we stared slack-jawed in disbelief.
Democracy was stolen by a clown from a nightmare so bad we haven’t even imagined it yet.
I’m afraid. America isn’t too big to fail. It’s under attack by a cheeto godzilla, as yuge as it is stupid,
crushing everything good with greed and directionless spite. Can we lucid dream our way out of
kakistocracy? Time will tell if this government by a parade of the worst people will be fascist
warmongers, a kleptocratic dictatorship, another vile variety of corruption and decaying pus or
all of the above. While tiny hands tweet death rays with weaponized Twitter, republican Jesus is
dropping bombs on the poorest and weakest. This is the American Dream. This is me waking up.
Posted by Stuart Ross at 16:03 1 comment: 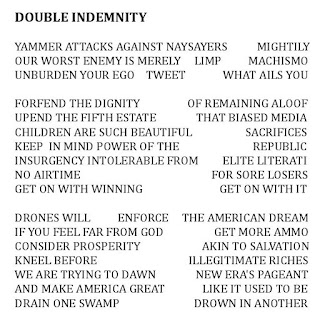 yearly, gray mother reblooms like a peacock
on the day i became for her.

[unlucky though, hubris, in our petty lives]

felt before seen, a growling, an
underweight firstborn begged from the sky
conspicuous calm, then later tempest of coarse doing
kicking at the dainty teeth of life.

in the days since you rose in the west, blinding orange sun
now she says in tinned telephone voice:

girl, have i not cause for pride? but i am begging
don’t be this political, don’t draw them down with fight
if it’s peace you want from these tidy new bigots.

curses come modern of color and cunt, skill and loving
killjoy genus, species feminist
walking under the eye of new jealous gods’ zealots
affronted by the extra-familial – we have only only the old
dead democracy’s lullabies.
Posted by Stuart Ross at 07:23 No comments:

Fuddle-Duddle Drumpf
You will not much care, of course
Our fury for your deceits, our frail
Unity rendered dumb and disunited.
For your gilt-rusted rage, you martialed
Untoward, unwitting brigades; and
Crowds did sway with indolence,
Knowledge mocking and afraid,
Illiterate to honesty. You grasped at
No greater good except to prod and
Grope the public sphere. You will
Deliver no promise but spite
Its remaining decency, hound
Civility into a sad corner, and will
Kick good with bad faith. Still,
We learn anew from anger’s focus
Are goaded by your ‘Great’ brag, you
Dare us this better rage.
Posted by Stuart Ross at 03:30 No comments:

You never know when democracy will choke
out a glottal-stopped death rattle
under elliptical bows of grandeur,
fences and steel that stand monolithic
under guile, the guise of greatness.
Can you hear the semantics cast in
knee-jerk frenzy
invoking the hysteria of red states?
Neville never saw the signs
glad-handing in clueless clucks
despite the world realigning
in desperate coordinates.
Churchill read ciphers like constellations
knowing fragility threads muscle and spirit.
We never saw it coming! Only you kind of knew he'd
ape it, an orange marshmallow man teetering over DC
dancing a bigly toppling jig.
Posted by Stuart Ross at 03:28 No comments: